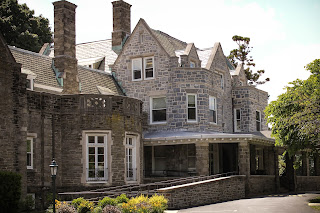 And he gave the apostles, the prophets, the evangelists, the shepherds and teachers, to equip the saints for the work of ministry, for building up the body of Christ, until we all attain to the unity of the faith and of the knowledge of the Son of God, to mature manhood, to the measure of the stature of the fullness of Christ, so that we may no longer be children, tossed to and fro by the waves and carried about by every wind of doctrine, by human cunning, by craftiness in deceitful schemes. (ESV)

In the last couple of months, I've heard of the death of a couple of influential professors. The tributes I read reminded me of how God has blessed His church with these men. I began to think about the teachers and professors who have influenced me.

And then I read a post recently from someone who graduated from Westminster Theological Seminary (WTS). What he wrote about WTS was foreign to me. He admitted it was based on "his experience" but it was full of charges and accusations about the culture, faculty, and students there. It was such an unkind caricature I will not link to it here.
It discouraged me but motivated me to finish what I started weeks ago.
I want to tell you who some of the men were that blessed me and my time at seminary.
(I've written a  "Part II" as the men below are only a few of the men God used in my time at seminary.)
Book recommendations follow.
(Listed in alphabetical order...)

Bill Edgar--Dr. Edgar teaches apologetics. He is a godly, gracious and pastoral man. My wife and I and our friends were treated to Dr. Edgar's and his wife, Barbara's hospitality in their home a number of times when we lived there. The Edgar's blessed us.

Sinclair Ferguson--Dr. Ferguson taught Systematic Theology at WTS when I was a student there. I learned a great deal from him. His prayers before class began were rich and profoundly devotional. As students we could tell Dr. Ferguson's heart was a pastoral one and his love was for the Church. His humility was a model for all of us.

Richard Gaffin--Dr. Gaffin taught Systematic Theology and New Testament during my time in seminary. He is a brilliant man but always made time for his students. When my wife and I were seeking a church home my first year in seminary, I made an appointment to ask Dr. Gaffin's advice. He gave me over an hour of his time and had encouraging things to say about every church I mentioned. He emphasized the importance of joining and serving in a local congregation as soon as possible. Throughout my time in seminary, he would check to see how we were doing in our church home.

Scott Oliphint--He is my brother but was also my professor, another Apologetics prof. He continues to teach Apologetics and also Systematics as WTS. He was once my Young Life leader when I was in High School and my pastor when I was a member of an OPC church in Amarillo, TX. He has always been my mentor. His love for his family, the church, and the Lord Jesus Christ is something I will always aspire emulate.

David Powlison--He taught some of my counseling classes at WTS and is the Executive Director of CCEF. His ability to pastor the human heart and his relentless pursuit of the glory of Christ was on display in the classes he taught. We would often begin classes by singing a hymn together and Dr. Powlison would pull a nugget of truth from the hymn and riff for a few minutes. It was always encouraging to our faith. I will forever be grateful to Dr. Powlison and his wife Nan for how kind they were to me and my young family.

My primary point in these brief testimonies is to highlight the pastoral, godly men God gave me at WTS to prepare me for ministry. There was a good bit of academic work, but it was never delivered apart from pastoral care and concern for the Church of Christ. I am grateful that God continues to allow these men to still serve His church.

All of these men have written a number of books. If you want to get a taste of the feast I was served back in seminary, I have listed only one from each. You would be served well to read these and other books they have published:

Bill Edgar
Reasons of the Heart

Richard Gaffin
By Faith, Not By Sight


Scott Oliphint
The Majesty of Mystery